Turkmenistan’s exports consist of handmade carpets and vast amounts of natural gas. As one might guess, its not the carpet sales that built all these fancy new marble clad buildings and brought 1000 people from around the world to come revel in the national horse.  Turkmenistan is the 4th largest gas producer in the world.

We were roused by a hotel-wide intercom instructing us to get up to catch a bus at 6AM to the Ashgabat Hippodrome where we were to see the horse beauty contest. On the bus we met a horse geneticist from Kentucky who told us he had been invited to the conference and when he asked what they would like him to present at the conference they told him that they just wanted him to come to the weekend event, all expenses paid.  This story should have given us some inkling about what this conference is all about and what, for that matter, the power base seems to be all about, it’s a culture of posturing.  These are beautiful horses but the marketing methods seem antiquated in world where people are sensitive about making up their own minds.

When we arrived at the Hippodrome there were hundreds of young people, students, standing on the sidelines. The boys wore matching suits and girls had on their red school costumes, all carrying Turkmen flags. We were told they had been bused there as early as 4 AM to greet the President when he finally drove by around 7:30. Then, they stood in place till the program was over at around 11:30 to wave their flags at the President drove away. We watched as the minions laid out carpets so the President did not step on pavement when he was to arrive. Then we were herded to the stands after much debate about where to put us.  Finally the program began with the giving of Turkmen horses to the President from provinces of the Country , then the gift of a horse from the Police and Military. With this horse he was requested to ride so the President changed into traditional dress, mounted the horse and rode around the track followed by a few hundred horsemen, all in matching traditional garb. This all took an hour or so.

Then there were a few horse trick demonstrations with men and women galloping at full speed doing various forms of acrobatics on horseback. After this they began judging the horse beauty contest which went on interminably. It was cold and windy and most people were not dressed for the situation. After the finalist horses were paraded around, the judges went into deliberation for almost an hour while we sat in the cold.  A few people tried to leave the stands to get warm in the sun but were turned back. Two of our translators were locked in a room when they tried to leave to get warm.  Finally the winning horse was chosen and its owner was given the keys to a new car. Old ladies covered the car in flower petals as the winning guy preened around praising Allah for his good fortune.

When we finally got back on the bus but rather than going back to the hotel we were taken to a large banquet hall they called a restaurant where we were fed the same menu that seems to be fed for every meal.  However, this meal was tainted and I got sick later that day.

By the end of this they told us the exhibition would be closed and that what we needed to do was go to the closing ceremonies where we would receive a diploma for attending.  While we were there trying to stay awake during the speeches which were all the same self-congratulatory drivel,  the Embassy staff cleared up our booth. So, we brought all the gear, all our instruments just to perform at the Horse Exhibition for  part of one day, mostly for dignitaries of the country. All the rest of this show was dedicated to the posturing of the Horse Association and the Government. I have to say, I was disgusted and, to boot, I’d come down with an unsettled stomach which may have had something to do with my dark mood by the end of the day.

Candra, like me, has a strong and visceral reaction to authoritarianism. She vowed to bow out of the Sunday activities which now loomed before us with the same 6 AM start and long wait for the President.  That evening Candra stood in line for 3 hours trying to get the travel reimbursement for us. After midnight she knocked at all our doors and told us we needed to come to the lobby to present our passports and sign a document so she get the money owed. After this ordeal I slept soundly.

NOTE: I wrote this post having been chilled to the bone and in the middle of battling food poisoning. Please know how much I appreciate the hospitality of the Turkmen people, the President of the Country and the Horse Association. I also appreciate the right I have in my own country to be grumpy and critical when I don’t feel so good. I don’t pretend to understand this country.

youth waiting to greet the President

dancers greet us and the president 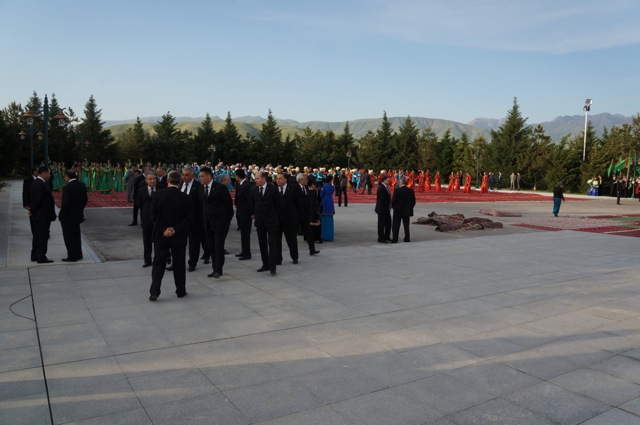 President being presented with his new horse 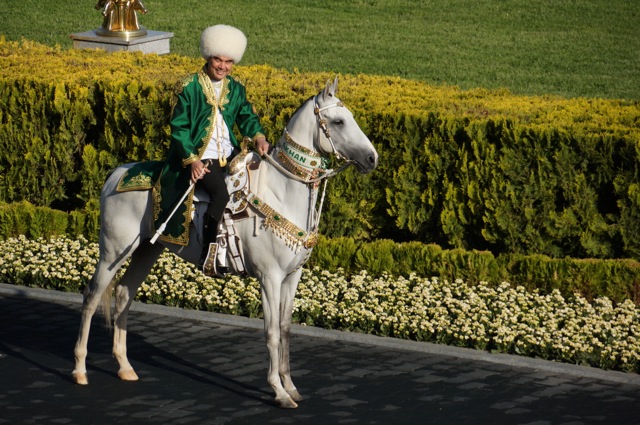 President shows off his new horse

Check out our concert dates!.

Header photo by Louis Vest, CCL, near our home in Virgin, Utah. Portrait by Nick Adams

Some things that have intrigued us lately